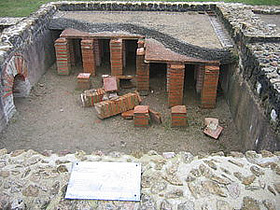 A hypocaust (Latin hypocaustum, Greek hypocauston) was an ancient Roman system of underfloor heating, used to heat houses with hot air. The word derives from the Ancient Greek hypo meaning "under" and caust-, meaning "burnt". The Roman architect Vitruvius, writing about the end of the 1st century B.C., attributes their invention to Sergius Orata...

Hypocausts were used for heating hot baths (thermae), houses and other buildings, whether public or private. The floor was raised above the ground by pillars, called pilae stacks, with a layer of tiles then a layer of concrete then another of tiles on top; and spaces were left inside the walls so that hot air and smoke from the furnace would pass through these enclosed areas and out of flues in the roof, thereby heating but not polluting the interior of the room. Rooms requiring the most heat were placed closest to the furnace, whose heat could be increased by adding more wood to the fire. 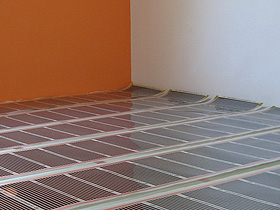 Here is the modern 'hypocaust' - cheap, technological, reliable. Much more comfortable than all the conventional heating systems. It complies to the highest ecological and health requirements in the world.

Advantages
• Temperature control from 40°F to 80°F /5-30C/ - accurate to the degree.
• With its large heating surface distributes the heat more evenly and comfortably throughout the room than traditional systems.
• Heated floors mean complete comfort, not only on the floor, but for the whole room.
• Isn’t trouble in renovations.
• With floor heating there is less dust in the rooms.
• With optimal exploitation it uses less energy than the normal heating system with 10% to 40%. In homes it is about 30%.